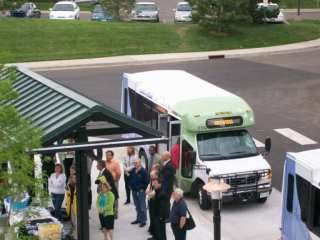 First of all, cost usually go down when you contract out services. Most contract operations do not use union labor (I will do my union rant some other time), so they pay less than union wages. In addition the operations usually cut down on overhead over the bureaucratic transit agency.

However, the cons currently out weigh the positives.

First of all, while I believe in private enterprise and especially small business, there is little change a small operator the Resorts (owner of Lewis Brothers) or a company like LeBus would end up operating the service.

Instead one of the "big" operators such as Stagecoach that are not only non local companies, but are not even US based. There for the profits and the benefits of the outsourcing not only leave the immediate area, they do even benefit our country. Since employement will stay the same but wages go down there is no benefit to the community.

A few years ago I was in Denver for a meeting. At the time Denver's bus service was outsourced to three different providers. I actually had a wonderful experience with a bus driver so I decided to let RTD in Denver know. Usually companies only hear negative so I go out of way to let them know when I have good service. I called RTD and the operator was in shock they were getting a compliment.

He said it was the first time he had ever gotten a postive comment about a contratracted service. Whether that is a sign that people don't have the class to compliment the drivers when they do right or the drivers are that bad in general, you will have to decide for yourself.

Other downside of contracting out service is maintence. Often the companies will scimp on taking care of things to make more money. Once again because the companies are not local they do not have any reason to ensure that the equimpment is properly maintianed to help the community.

In Los Angeles and other cities that have contracted out service there has been bad experiences with air conditioners, wheelchair lifts, and other equipment malfunctions. In addition there has been multiple horror stories about last runs of the day missing due to malfunction equipment so thus people being stranded. In addition I have seen photos of buses being held together with duct tape in order to keep major items such as the A/C cover from falling off.

The only solution is to have oversight and conditions in the contract if they things happen or maintence is not up to standards, the contracter can be fined.

Am I saying that all contractors are bad? Of course not, like anything there is good and bad. However, anytime you contract to a company that has no financial interest in the local community, you send the money out of town with no benefits to the community.

While I have no idea what Dougall's true motives are, you need to look at the unitended consequences of any action taken and make sure that the local community benefits from the decisions made.

First let me state that I am impressed with the way MV Transport is running the Paratransit Services in Weber and Davis Counties. If this is bad then where is it good? I myself find that the Mismanagement of the Utah Transit Authority is why bus service is being cut in Weber and Davis Counties, in favor of Rail service which is expensive to build and caters to Downtown Salt Lake City while outlying areas suffer. I will agree that the UTA is different in that it covers the area of the New York Metropolitan Transit Area yet is the same population as the VIA in San Antonio Texas. Yet these SO-Called planners are demanding and getting New York pay. This is a crime to me.
I would be in favor of Rep. Dougall's proposal, except I have lived where a Transit Authority contracted its service and continually runs in the red. I am in a different mind set here as I think that the UTA cannot handle the size of service that is needed in the Greater Metropolitan area. Let the UTA be in charge of Transit through-out Utah. Divide the current UTA into three smaller Authorities, representing Salt Lake, Summit and Tooele Counties; Davis and Weber Counties, and Utah County. These smaller Authorities will provide bus and Trolley services connecting to the Inter-agency UTA Service (Front Runner, 470, 472, 880, and alike) That way the Front Runner can become a state passenger Railroad, while bus service and alike will be in the control of local Authorities to meet the growing needs of the area.