How well does your trail work?

I am a walker, I love to do a lot of walking. While it may not show right now with the pounds I need to do I have walked more than 15 miles in a single day.

When I visited Portland before moving up here in 2010 and early 2011, and after moving here I would do walks suggested by Laura Foster in her books "Portland City Walks" and "Portland Hill Walks" which are two books I would highly recommend if you want to do sightseeing in Portland on foot.

However there is also times I like to walk off road trails because they tend to be quieter and I can do some hard thinking along the way. When I lived in Salt Lake City I would walk the Jordan River Trail that travels the center of the Salt Lake Valley and when I lived in Spokane, WA I would often walk the Centennial trail that traveled from Spokane to Couer D' Alene ,Idaho. 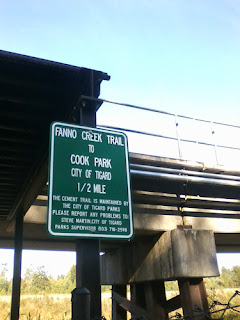 Here in Portland I live realtively close to the Fanno Creek Trail which travels from Tualatin to Portland along several different rights of way and sometimes in streets. I have walked part of the trail that is along an old rail line but have not attempted to walk the who trail until last week.

One of the problems with attempting to walk the entire Fanno Creek trail is the lack of a map that is easy to access. In fact I have not been able to find any map that shows the entire trail from beginning to end that is current. I had to piece together all the information in order to find my way.

Which is part of Google Maps