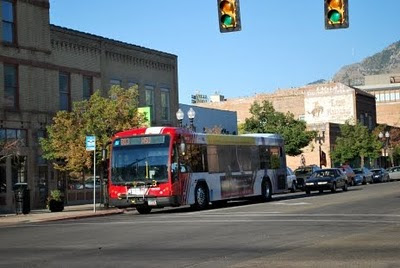 There is an editorial in today's Standard Examiner about the UTA bus changes in Ogden:

OUR VIEW: UTA misses the bus

The Weber County Forum has also chimed in on this issue:

Both point out that UTA could have done more including public hearings. Like many transit agencies they give the standard bureaucratic line that it changes did not meet the 25% change requirement.

While the UTA could have done more it appears that the Standard Examiner doesn't want to step on any toes in its own city or more appropriately too cowardly like many newspapers to direct attacks in certain places.

After all lets look at the comments from Steven Conlin the president of the Ogden's 25th Street Merchants Association:

"Concerns include the diesel fumes spewed out on merchant customers as they walk down the sidewalks, noise pollution, litter strewn from ridership and mass gatherings that occur in front of businesses due to transfer or stops"

The last time I checked, a majority of the buses used on the 603 are the new Gillig Advantage BRT buses that have exhaust on the top of the bus and burn cleaner than other buses. The he also brings up the problem with noise pollution. Lets see the last time I checked there is plenty of trucks and tour buses that travel down the street that make noise plus one idiot with his radio blaring makes more noise than a bus but then again that is not the real issue is it, it is just a Red Herring.

Also where are these "mass gatherings?". The only mass gatherings I have seen are at the 25th and Washington stop which is a major transfer stop. The last time I checked there is no businesses located along this area.

Lets face facts, put all the red herrings aside and have Mr. Conlin tell the truth, his organization doesn't want "those kind of people" walking in the area. After all, they might scare the suburbanites that they are trying to attract.

My question, is the bus service being used as a scape goat because business is down and it easier to attack than the real issues?

What they have done is making riding the bus and making transfers harder for the riders.

I have walked 25th Street many times and spent money along the street because I support locally owned businesses. However, the next time I am in the area I will have second thoughts about that. Gondola Godfrey, Steven Conlin, and the 25th Street Merchants Association has lost my business.