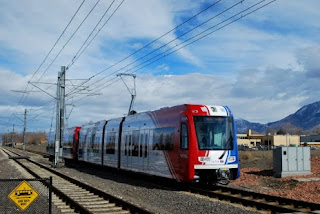 UTA will be holding a special celebration August 3rd for the opening of the Mid Jordan and West Valley TRAX lines. Trains will be operating on their new schedules offering public rides from approximately 9:00AM to 11:00pm. Fare will be free but are encouraged to bring food items to donate for the Utah Food Bank.

This will be an excellent opportunity to check out the newest light rail lines in the country and ride the new S70 low floor light rail vehicles.

I will not have the opportunity to ride the new lines until sometime in the future probably next June or so. I look forward to checking them out.
Posted by John Dornoff at 6:53 PM 2 comments:

This Week at Amtrak

Image via Wikipedia
From the United Rail Passenger Alliance

Recently a prominent state rail advocacy group signed on accepting the ultimatum of a major railroad. What does this portend for the rest of the country?

Cannot Predict HSR Speed? How About a Happy Medium…

“A thousand miles seems pretty far, But they've got planes and trains and cars, I'd walk to you if I had no other way…” Hey There Delilah - Plain White T’s

Back in January of 2008, not long before the most recent resurgence and subsequent retreat of American High-Speed Rail, Rick Harnish of the Midwest High Speed Rail Association was one of the highlighted speakers at the Carmichael Conference held in St. Louis, Missouri. An interesting anecdote during his lecture told of the public’s reaction to plans for high-speed trains: “How do we get the trains we already have to run on time,” and “How do we keep the bathrooms clean.” This may lead one to wonder: Are the public’s expectations low or just realistic?

It should be noted, all hyperbole aside, that there are currently no high-speed trains in operation anywhere on the North American continent. The true definition of HSR by those who actually operate it is 250 kph (155 mph), so Amtrak’s Acela does not quite make it. But that’s okay here in the USA where our motto is, “If you don’t like what you see, lower your expectations.” Therefore, the American definition of HSR is anything faster than a bicycle going downhill. As a result there are projects ongoing to raise certain corridors up to top speeds of 90 mph or greater. The freight railroads which own the track in those corridors have their own ideas pertaining to “high speed.”

As has already been covered by This Week, Norfolk Southern’s CEO, Wick Moorman, made it clear that for his railroad “passenger train” means 79 mph, maybe 90 mph in certain circumstances. Ergo, the extension of regional trains in the Commonwealth of Virginia to Norfolk will top out at 90 mph. CSX has the same vision for passenger trains. In upstate New York, CSX has stipulated that 90 mph be the top speed for the current service running from Albany-Rensselaer to Buffalo. The government of New York State sees things quite differently, pushing to raise those train speeds to 110 mph. This is where perception meets reality; the former New York Central main line, the storied Water Level Route, is the property of Jacksonville, Florida-based CSX.

In a move to help settle this impasse, the Empire State Passenger Association agreed with CSX:

“The Empire State Passengers Association (ESPA) has endorsed 90 miles per hour as the near-term maximum speed for Amtrak’s Empire Corridor passenger trains operating on CSX’s busy freight mainline across upstate New York from west of the Capital District to the Buffalo region.”

To be sure, the ultimate goal of ESPA is to realize 110 mph trains in New York State. Still, they have wisely determined that half a loaf, paid for by someone else, is better than none. They must also be keenly aware that time is of the essence. As per the Passenger Rail Investment and Improvement Act of 2008, specifically Section 209, it is expected that individual states will be held responsible for the operating losses for such trains. If everything had gone as per the language in the PRIIA, then in October, 2013 New York State would have to buy the cow because the milk will no longer be free.

Asleep at the Switch

Speaking of the Passenger Rail Investment and Improvement Act of 2008, formally known as Public Law 110-432/Division B, it may well be described as a train wreck in no motion. By law enacted October 16, 2008, Amtrak was required per Section 209 to “develop and implement a single, nationwide standardized methodology for establishing and allocating the operating and capitol costs among the States and Amtrak” for routes under 750 miles by October 16, 2010. Now some nine months later, no such “methodology” has been brought forward by Amtrak, although negotiations with the states are ongoing. Even so, the law is clear as to what was supposed to happen following the deadline and no agreement:

“If Amtrak and the States (including the District of Columbia) in which Amtrak operates such routes do not voluntarily adopt and implement the methodology developed under subsection (a) in allocating costs and determining compensation for the provision of service in accordance with the date established therein, the Surface Transportation Board shall determine the appropriate methodology required under subsection (a) for such services in accordance with the procedures and procedural schedule applicable to a proceeding under section 24904(c) of title 49, United States Code, and require the full implementation of this methodology with regards to the provision of such service within 1 year after the Board’s determination of the appropriate methodology.”

In other words, with no negotiated agreement in place by October 2010 there should have been accelerated implementation deadline for the Surface Transportation Board-issued standards. Instead of five years from enactment if the schedule had been followed, with the STB involved, it was supposed to be two years (the missed deadline) + 120 days (the STB decision) + one year = three years and four months vice five years. The STB was required to issue standards by mid-February 2011, to become effective and binding one year later.

To be certain, the Surface Transportation Board has more than enough on its plate these days, what with every utility in the land seemingly attempting to re-regulate the railroad industry. As such, they are more than content to sit back and watch the negotiations from afar, and will only intervene if a dispute arises between the states and Amtrak.

This is nothing we have not seen before, here at This Week. We fully expect Amtrak to come into the STB waving a tardy “agreement,” and then the STB to take the path of least resistance by adopting it. The inherent danger of such after-the-bell acceptance would be the serious legal questions about the validity of any cost standards thus generated. Any other operator seeking to bid on any route negotiated with this agreement will be free to challenge said standards simply on the basis of missing the October 2010 deadline, and the STB’s subsequent failure to promulgate standards unilaterally as specified in the PRIIA when that happened.

No matter how you slice it, the costs of transportation, all transportation, are going to be reallocated such that the states will have a more direct financial responsibility. The Passenger Rail Investment and Improvement Act of 2008, specifically Section 209, has a goal of establishing a uniform strategy for determining those costs of train routes 750 miles and under and then passing the bill along to the states. Translation: The federal government is getting out of the corridor business. Eventually we will see the same scenario with the Northeast Corridor.

Learning from the British experiment, the physical in-place plant should belong to a public entity; in the case of the NEC, perhaps a compact of those states. The legal foundation for such a compact already exists:

“Consent to Compacts.--Congress grants consent to States with an interest in a specific form, route, or corridor of intercity passenger rail service (including high speed rail service) to enter into interstate compacts to promote the provision of the service…” - The Amtrak Reform and Accountability Act of 1997, Section 410

Connecticut and Massachusetts already own all or a substantial portion of their intrastate section of the route. The states already have the bureaucratic machinery in place for their commuter services. The maintenance needs of the NEC are roughly $500 million per year, which comes out roughly to $1 million per mile. New Jersey would have the largest stake, at 58 miles. But they also have the largest NEC demand: NJ Transit. Is it any wonder that New Jersey politicians are fighting tooth and nail to keep the status quo?

The next logical step would be to bid out the premium services. If, say, an entity such as Sir Richard Branson’s Virgin Trains wins the bid, they purchase and maintain their own equipment; they pay an access fee, and the public gets to ride in the same manner as it would if it had flown. The private entity now has room to innovate within the bounds of its own equipment and on its own dime, far from the scrutiny of the budget hawks. In the real world of HSR, this is becoming a reality. In 2013 German Rail (DB) will commence HSR Intercity Express (ICE) service from Frankfurt and Amsterdam to London. The existing HSR services on the lines will continue to run. Although DB is a public entity it is improvising like a private company. This also demonstrates that HSR can be done over someone else's infrastructure, and that competing HSR services can coexist. That is about the practical extent of “privatization” in the corridor world.