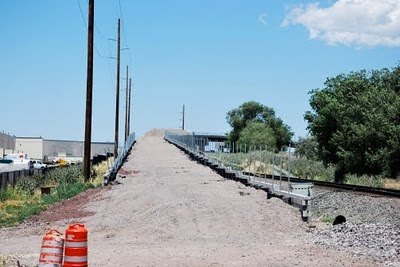 Below is the FrontRunner South construction update for July 24 – 30. Please note that construction information is subject to change.

The westbound right lane on 3300 South will be closed Monday through Thursday.

Please note that Central Avenue has reopened until crews resume work on the bridge walls.

The eastbound right lane on 4500 South will be closed Monday through Thursday.

On the 4500 South Frontage Road crews will be extending gas and waterline casings Wednesday through Friday, and at the 5300 South bridge crews will continue work on two of the bridge piers.

The 4500 South Frontage Road is currently closed at the tracks for bridge work through the end of August.

There will be the following lane closures on 5300 South:

Crews will continue excavating at the station site in preparation for upcoming concrete pours.

Considerable progress has been made on the flyover structure west of Salt Lake Community College’s Miller Campus at 9800 South. The 642-foot flyover bridge features a 40-foot-high bridge deck that will allow FrontRunner to travel from the east to the west side of Union Pacific Railroad’s track way. The flyover structure’s approaches consist of keystone block MSE walls filled entirely with lightweight fill to minimize settlement.

There will be the following lane closures on 9000 South:

There will be a lane drop with flaggers on the car dealership frontage road just north of 10600 South on Monday and Tuesday.

The eastbound left lane on 10600 South will be closed Wednesday and Thursday.

There will be a lane closure in each direction on 10800 South near the tracks Monday through Friday.

There will be the following lane closures on Bangerter Highway:

Lightweight fill for the job is being stored at the station site. There are no construction activities to report.

Near 15000 South crews will extend a water line casing, and near Camp Williams and farther south along the Jordan Narrows, Union Pacific crews will be demolishing existing track to make room for UTA’s new track. Below the Thanksgiving Point golf course, crews continue to excavate the slope.

There are currently no impacts to motorists in this area.

There will be truck traffic with flaggers in the following Lehi locations all week:

· Garden Drive near the pedestrian tunnel

A portion of the Lehi Station Park and Ride Lot is now open for public use.

At the pedestrian tunnel crews will continue work on the walls, footing and stairs, and at the Park and Ride Lot, crews will install irrigation sleeves, adjust manholes, and work on curb and gutter sub grade preparation.

In American Fork, crossing upgrades will finish this week at the 100 West and 100 East crossings and begin at the 1100 South crossing. Upgrades include signal and track work, the installation of concrete medians and signs, road striping, and asphalt replacement.

In Vineyard near the Vineyard Station platform, crews will continue constructing a box culvert, and in Orem between 800 South and University Parkway, crews will surface, line and dress the main UTA track and place ties for and skeletonize a second track.

There will be truck traffic on Millpond Road near 300 East Monday through Friday.

There will be alternating traffic impacts at the 100 West and 100 East crossings in American Fork all week so crews can finish crossing upgrade work.

The 1100 South crossing in American Fork will be closed for crossing upgrade work Monday through Sunday.

Significant progress has been made in Area 10 along the Union Pacific Railroad corridor between University Parkway in Orem and Freedom Boulevard in Provo. Crews have prepared a path for FrontRunner by grading and clearing the right-of-way and relocating water lines. Drainage and irrigation installations are generally complete in this area, and main line earthwork has been finalized from University Parkway to 2000 South in Orem and from the Provo River bridge to 500 West in Provo. At-grade crossing improvements have also been completed in Provo at 2000 North, 2800 West, 1680 North, 820 North, Draper Lane, 900 West, 700 West, 500 West and Freedom Boulevard.

Between University Parkway in Orem and 2000 North in Provo, crews will continue to de-stress rail and surface, line and dress the track for the second line. Between University Avenue and 900 South, crews will lower a Union Pacific phone cable duct, work on mass excavation of the grade, install duct bank for UTA’s line, and install signal conduit.

There are currently no impacts to motorists in this area.


Thanks again for your interest in the FrontRunner South project. If you have construction-related questions,
please call our 24-hour construction hotline at 1-888-800-8854.
Posted by John Dornoff at 6:33 PM