Had the opportunity to attend the grand opening of the new Portland CL line this past Saturday. This is the third new rail opening I have attended, the first being the opening of the original TRAX line in 1998, the second was when I was invited on the VIP run of UTA's Front Runner commuter rail service between Ogden and Salt Lake City, and finally the opening of the this new streetcar line.

My first ride on the new line occured before the actual ceremony as I rode the new CL line from 11th and Jefferson to OMSI (Oregon Museum of Science and Industry) which I happen to be a member of.

The MC of the event was the mayor of Portland Sam Adams who will be leaving office at the end of his term in a few months. He took time to blast a attack article in the Oregonian and pointed out there is already investment going on along the streetcar line. 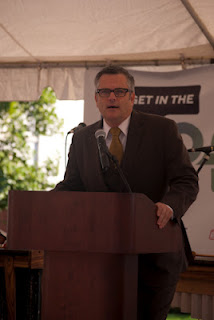 Another speaker during the ceremony was Neil McFarlane who is general manager of TriMet. For anyone who follows transit blogs in the Portland area, they will know that he is often blasted and called some rude names in many circles including on a blog run by a disgruntled former bus driver.

He actually rode the same streetcar that I did from the Portland State University area and will have to say that I found him to be very approachable and talk to several people on the streetcar. 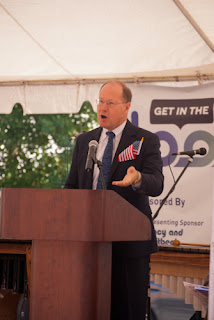 There was several other excellent speakers during the ceremony including one of the people responsible for the streetcar itself Michael Powell who happens to own a bookstore of some notoriety that is served by both of the streetcar lines now. 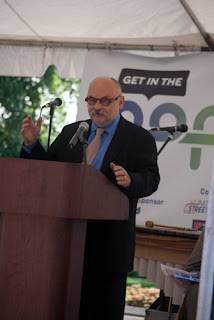 After the ribbon cutting the VIP's boarded the Oregon Iron Works prototype car that was making its inaugural run in revenue service. There has been some complaints about Oregon Iron Works because they are behind in production of the cars by a couple of months but one of the speakers noted that the previous cars were 8 months behind in arrived so Oregon Iron Works is actually doing pretty good. 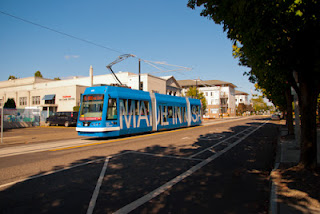 I rode the next streetcar to the Lloyd District and took these pictures of that streetcar returning to OMSI. The area I took this picture is pretty desolate because the area is surrounded strictly by high rise non-mixed use office buildings that are ghost towns on weekends. You may also notice in the picture above that to the right there is a Honda Accord parked in the bike line which is supposed to be the lane on the right with parking to the left of the bike lane. 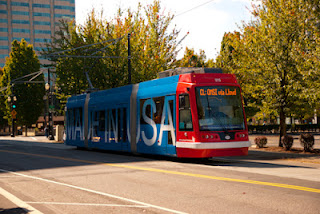 After grabbing a bite to eat I made a point to catch this streetcar on its next trip back to downtown. The car had a minor problem with its wheelchair ramp that was quickly taken care of and the we had a good trip back to 10th and Clay where I got off.

The line is currently U-shaped but in less than three years will become a true loop when the new bridge over the Willamette River is completed by TriMet and the streetcar will use it along with TriMet light rail trains.

It will be interesting to see how this line performs over the long haul. Right now frequencies are not what is needed and the area is no Pearl district however that may actually be a good thing. Do we really need lots of new high rises that bring the suburbs to the urban center, or should we see development that is more human scale? There is plenty of potential along the new line and time we tell what will be made of it.